A fully detailed account of the way in which Bingham was settled in prehistoric times can be found in the section on the History of Settlement of the parish. Here a summary is presented. For detailed descriptions of finds go to Flints and Stone Axe Heads in Description of Finds and for an interpretation of the meaning of the distribution of these finds to Prehistory in the Analysis of Results.

One clearly identified Lower Palaeolithic flake and three other possible artefacts from this time found during field walking suggest that Bingham was visited by early species of humans. While there can be no certainty about putting a date to these finds they are more than 250,000 years old and were made either by an early form of Neanderthal or, from earlier times, by Homo heidelbergensis. Further evidence of Lower Palaeolithic activity in the Bingham parish is revealed by a very worn hand axe that was found several years ago. It is now in the Nottingham University Museum, but the exact place where it was found in the parish is not known.

The next evidence of human activity here is in the Later Upper Palaeolithic, which lasted from 13,000 to around 11,000 BC. Finds gathered by field walking from this period in Bingham are few, but three blade-like worked flint objects found in the parish are now lodged in Nottingham University Museum. One of these is considered to be Late Upper Palaeolithic; the other two are not readily dateable, but could be from this same period. During this time, reindeer, horses, red deer and wild cattle roamed the land and it is thought that conditions were favourable for permanent residence of groups of Homo sapiens hunters. These finds, however, probably indicate that someone passing through the area lost them. There is no evidence that they lived here.

Flint blade found near Starnhill House in the south-east of the parish. It is thought to be Late Palaeolithic. It is a partly finished blade that would have been carried like this and finished off when it was needed (Nottingham University Museum Photo: R. J. A. Wilson).

Unfinished flint artefact with flakes removed from both faces and the beginnings of a tang projecting from the base (bottom right) - possibly a knife (not closely datable). 77 x 26mm.
Trent & Peak Archaeological Unit Photo: Robin Aldworth

About 9,500 BC the Ice Age finally ended and the Mesolithic period began, lasting to 4000 BC. At this time a lake dominated the topography in the northern part of the parish. It formed shortly after the climax of the last Ice Age, 20,000 years ago. The lake gradually silted up and by the end of the Mesolithic the area of open water or marsh was quite reduced. To the south of it was an east-west trending ridge with a long, south-facing slope down towards the River Smite and its tributaries. It is likely that much of the area was wooded at this time. A small number of unequivocal Mesolithic tools, one an Early Mesolithic microlith, show that hunter-gatherers were active in the area from the earliest Mesolithic. By far the largest proportion of the early dated flint artefacts found during field walking is a product of the blade technology that characterises the Mesolithic to Earlier Neolithic and cannot be dated better than that. However, most of them are found in sites around the lake (see Figure 3.5) or on it where the lake deposit is thin and it is presumed that during the Mesolithic had silted up. It is inferred from this that this assemblage is most likely to indicate Mesolithic hunter-gatherer activity around the lake, which would have been a very attractive place to them, being rich in food and other resources. There are various theories about how these people lived. Among them is the suggestion that they moved camp seasonally, but each family group had its own site that it returned to year after year, making them semi-permanent homes. At Star Carr in Yorkshire, also a lakeside site, it has been found that the hunter-gatherers arrived there in the spring and left in the autumn. This may have happened in Bingham.

The strongest evidence of Earlier Neolithic activity is in the south-western corner of the parish around Lower Brackendale Farm. Here (see Figure 3.6), there are three sites, two with a very high content of dated Earlier Neolithic tools; a third to the east of them has a lower density of finds. There is practically nothing earlier and nothing attributable to the Later Neolithic associated with these assemblages. Of all parts of the parish this provides the strongest evidence for being the site of the first Earlier Neolithic farmers in Bingham. The site had many attractions. It is on a south-facing slope, with plenty of fresh running water nearby and good soil. Unlike the other two, this is a newly settled area with no evidence of earlier occupation. It could be that the farmers who settled here were newcomers to the region.

Throughout the Neolithic period the main axis of settlement appears to have been the watercourse that marks the southern boundary of the parish and the tributaries that drain into it. Concentrations of Neolithic flints associated with polished stone axe heads occur at several places here. The area around the lake is noticeably very poor in Neolithic material. It seems that while the lake was considered by the hunter-gatherers to be an ideal place to live, it was the south-facing slopes in the southern part of the parish that attracted the farmers.

It is generally believed that it was during the Neolithic that the process of forest clearance to create farmland began, leading ultimately to the present English landscape. The tools used for this were stone and flint axes and fire. Some axe heads were found during field walking, but others had been collected earlier, including one found while digging post-holes for a new gate in a house in Kirkhill.

Neolithic polished stone axes, which would have had wooden handles
Trent & Peak Archaeology. 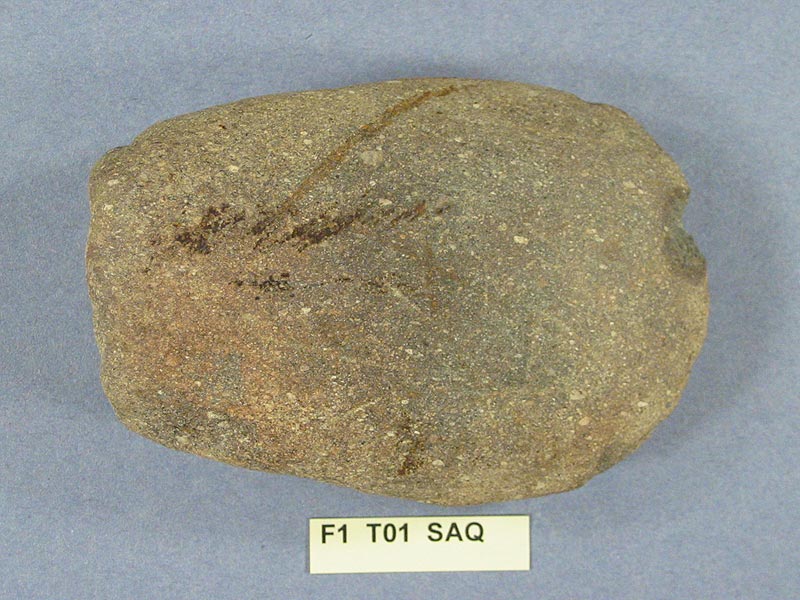 The technology for making flint tools changed mid way through the Neolithic period. Before that both the tools and the debitage (waste material produced when making tools) reflected what is called the blade technology. Typically blade shaped pieces were knapped using a soft hammer like an antler. In the Later Neolithic and Bronze Age the flints were worked using a hard hammer and tended to produce flakes that were as wide as they were long.

There are two places with dated Neolithic tools and a mixture of blade technology and hard hammer technology debitage in this southern part of the parish (see Figure 3.8). One is to the north and west of the Earlier Neolithic assemblages in Lower Brackendale Farm and seems to indicate an expansion of the settlement area out of the Earlier Neolithic sites. The other is on the banks of the River Smite south of Starnhill Farm buildings. There are two places with dominantly Later Neolithic assemblages, with very little earlier or later material (see Figure 3.7). One of these is to the north of the South Spring Farm area that has such a large concentration of blade technology material. The other is north east of Starnhill Farm. Both of them are a few hundred metres from the watercourses and seem to indicate occupation during the Later Neolithic of ground that had not previously been used. Water supply would have been met by springs, the presence of which is indicated on 19th century maps by farm ponds in the corners of fields. It is not known if these sites mark places where communities to the south expanded because of population increase or if they were where incomers to the region.

Assemblages of the products of hard-hammer technology associated with Bronze Age tools were found for about 1.5 km along the watercourse in the south Spring Farm, in places with no dated earlier material. There was clearly a dominant community here that had occupied this land since the earlier part of the Neolithic period and it might have been the presence of this long-settled community that forced the expansion northwards away from the running water as population increased. In several of these more northern areas there are dated Bronze Age tools (see Figure 3.9) associated with the products of hard-hammer technology, but no evidence of Neolithic occupation. Some, including the Granby Lane area and a small cluster near Saxondale roundabout, are close to or over the ridge line.

In the northern part of the parish around the lake area there is weak evidence of possible settlement on Parson’s Hill and a sparse scattering of hard hammer debitage in other parts of the lake margin signifying activity in areas that had not been in favour since the time of the hunter-gatherers. At Margidunum, excavations in the late 1960s yielded two Bronze Age socketed copper alloy axe heads.

Unfortunately, there is a large void in our information about the area now occupied by Bingham town.

The prehistoric settlement history seems to show that there is a possibility of a small community of permanent settlers during the Earlier Neolithic on the south-eastern lake margin, but the main area for settlement at this time was along the River Smite and its tributaries. Over the next two to three thousand years the population grew and, though the communities along the watercourse remained strong, new communities were forced to establish their farms in areas largely distant from sources of running water. This took them as far north as the ridgeline in the Bronze Age. By then much of the southern part of the parish had been utilized and parts of the northern half of the parish that had not been in favour since the Mesolithic were also now showing signs of activity.

No evidence of the Late Bronze Age was yielded from the field walking largely because flints were not so commonly used then. All the indications are that during the Bronze Age pressures of population, for the first time in history, restricted the freedom people had had to move their homes into entirely new, virgin territory when needs must. With these limitations on expansion, stable communities took root within several relatively small and restricted areas and were to continue to be ocuopied for centuries to come.