Outside Bingham parish, Iron Age settlements are known in Aslockton, Whatton, Radcliffe-on-Trent, Holme Pierrepont and several other places in the Trent Valley, indicating that southern Nottinghamshire was a well-populated area with farms and settlements dotted about in an agricultural landscape that was almost free of woodland. This area was at the heart of the tribal lands of people who at the time of the Roman occupation were called the Corieltauvi (previously known as the Coritani). They were a peaceful, agricultural people who tended to live in large dispersed settlements, within many of which the Romans built their forts and towns. The evidence gathered at Bingham fits neatly into this pattern.

Evidence of unequivocal Late Bronze Age activity has not been found anywhere in the parish. Neither has any of the pottery found been attributable with certainty to the early Iron Age. The best dated are pieces of Scored Ware, which are mid to late Iron Age. 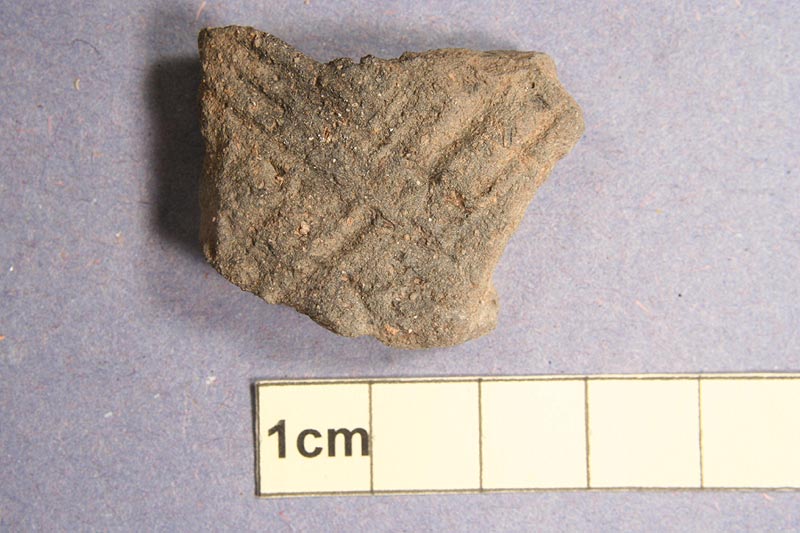 The decoration on the surface is thought to have been made by scratching wet clay with a stick. There is, however, no reason to predict a break in continuity of occupation at this time. Using evidence from crop marks and pottery scatters it appears that there were several small Iron Age settlements or farms in this area (see Figure 3.10). Three of them, Margidunum, Parson’s Hill (see Figure 3.11) and Granby Lane (see Figure 3.12 have yielded Bronze Age tools. One other, at Lower Brackendale Farm, is a reoccupation of a site with a rich Neolithic history, but scant evidence of Bronze Age activity.

It is unlikely that these are the only Iron Age farm or settlement sites in the parish. Excavations in Bingham itself revealed Iron Age pottery near the Chesterfield Arms. A double-ditched enclosure revealed by crop marks at south Starnhill Farm coincides with a single Iron Age pottery sherd, which is difficult to interpret, as are the four isolated Iron Age pottery sherds scattered elsewhere about the area. There were, then, four substantial Iron Age farms or settlements in the parish, with the possibility of others under built-up Bingham. Whether or not they were occupied concurrently has not been demonstrated, but evidence from later periods seems to suggest that they were.