Careful selection of materials by the builder in about 1830/1850 produced the attractive chequered brickwork terrace (Nos 13,14,15 and 16) west of Beauvale House. Clearly built in two parts (you can see the join), the eastern portion is noted as a boarding school in the 1861 census. Three schoolmistresses are listed along with several pupils. Initially Hardstaff and Brown's "top shop" was on the corner; it was the Tip Top Bakery from 1933 until 1974. Note also the curved bricks used at the far entrance opposite Newgate Street to protect against damage from cartwheels.

The Crown Inn is a 1960s replacement of a much older public house having its entrance across the corner. We know from a plan attached to the deeds of 4-6 Station Street that the freehold of the (old) Crown was sold by Lord Carnarvon in or around 1920. Next door, No19 is a late 18C house (note the Yorkshire sliding sash windows) with a 19C lean-to shop. In the directory of 1889 it was listed as Gray's painters (photo below) and decorator's shop, and remained so until the early 1970s. George Langley is listed in 1865 as a painter and paperhanger, possibly here.

Painter's handcart, owned by Mr A.H.Whitlock, who bought it in 1936. It was used to take ladders, decorating equipment and materials to the customers' premises. It originally belonged to W.H.Gray, painters and decorators, whose premises were in the Market Place and had been long in use before 1936.

The Manor House in the northeast corner is was built around the 1700's. The central fireplace and chimney tend to place it before 1760, when this style became unfashionable. It may have been a merchant's house with a hoist in the place of the half round plaster panel. It is the only building in the town with entirely header-bonded brickwork, popular about the end of the seventeenth century. The larger ground floor window is clearly a later alteration (probably late 19C), with its larger panes and different keystone. There are also the marks of two insurance plates that have been removed within the last 15 years. Might this have been the home of Thomas Machin, a wool merchant who lived in a six roomed house and died in 1740? (See 'Bingham in the Past' page 40). It was the likely home and office successively of Henry and Charles Doncaster, tax collectors, Asst Overseers, accountants and house and insurance agents. One of these may well have felt the need to improve the office accommodation by enlarging the window. The Earl of Carnarvon sold the freehold in 1920 to William and Charles Doncaster.

The early 19C building on the corner with Church Street repays close study, illustrating the many ways a building can change over time. It was Doncaster's drapers shop, called Manchester House, for over a hundred years until 1970. The eastern portion was originally residential accommodation with a front door. Look carefully at the side wall (over the school boundary wall) and you will see old narrow brickwork up to the first floor level, indicating that this residential eastern portion was built on an older single storey lean to attached to the original western part of the building. The label mould above the former window matches that over the upper windows. In older buildings this feature was to protect the window from water dripping from the roof (see the gable end of the post office house in Market Street). Victorian builders copied this and many other older architectural features for decorative effect. Note also the extremely elaborate and probably expensive dentillation brickwork supporting the eaves of the newer portion. Compare what you see now with the photograph below taken about 1900 to see just how the building has changed over the years. The streetlight has gone (many street lights in Bingham were attached to buildings), shop windows have been modernised and new ones added. Most interestingly, observe that there was no window above the JB advert. There is now, and it was clearly constructed in the original style to match the original windows of the older building.

Two sisters ran Bingham's first telephone exchange at No29. The 1950s brutalism of the Co-op contrasts with the warm brick hues of the mid Victorian and Georgian facades on the south side of the square. The Co-op car park replaced older shops including the Welfare Office. 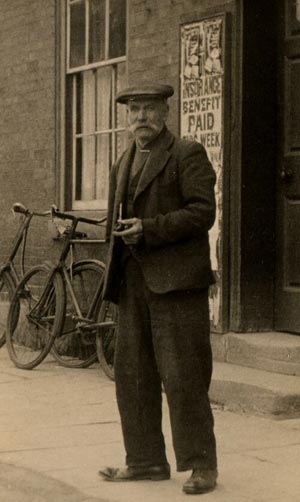 Waverley Cottage occupies a plot with a similar history and dates from around the same time. The 1881 census has Edmund Richmond as a tailor probably living here. His apprentice moved from here to his own shop in Market Street and then in 1897 to his own premises at 9 Newgate Street. Waverley Cottage was still a tailor's in the 1920s and 30s (John Magson).

In 1857 The Earl of Chesterfield sold William Huckerby, Superintendent Registrar, a piece of land from Beauvale Farm fronting onto Chesterfield Street to build Cromwell House. Later it was owned by a member of the Doncaster family.

'Northleigh' (1913/4) is one of four similar villas built by James Walker between 1899 and 1915. (The others are Westholme 1910, Eastville 1899 [107 Grantham Road] and No6 The Banks). The Women's Institute hall dates from 1920 and was made up of two WW1 army huts. The attractively proportioned railway station, probably designed by Thomas Chambers Hine, was built in 1851. It originally had an equally attractive waiting room and offices on the east side of the entrance hall, demolished after the 1950s. The line had been threatened by Dr Beeching's report but survived after a public outcry.

West of the station was a cattle dock and timber yard; some pulley wheels for hoists survive over the entrances to the contemporary warehouse (a goods depot was on Chapel Lane opposite the still original signal box). In the 1881 census a Stephen Bickmore is listed as a master builder living at the Blue Bell and in the 1879 directory as builder and timber merchant of Station Street. The timber yard may have been his. Old Mill Court is on the site of former steam corn mills, at one time owned by Hardstaff and Brown.

The rest is 20C infill. Nºs6 and 8 replaced some very old barns. The bungalows at the end of Station Street were built on semi-derelict land that has seen service as the council yard and a coal depot. Those in Langtry Gardens, the name recalling her visits to Bingham as a friend of Canon Miles' son, are on surplus land from Robert Miles School, formerly the Rectory grounds.